A Guide to Visit the Verdon Gorges

The Verdon Gorges, “Gorges du Verdon” in French, is a gorge in the Alpes de Haute Provence along the Verdon river. It should be on your bucket list while visiting the Cote d’Azur and the south of France.

Experience the best activities and  tours to this fantastic canyon. Enjoy the natural swimming pools, sublime point, cross the impressive Galetas bridge (Pont de Galetas) and create unique and memorable memories with your friends and family. 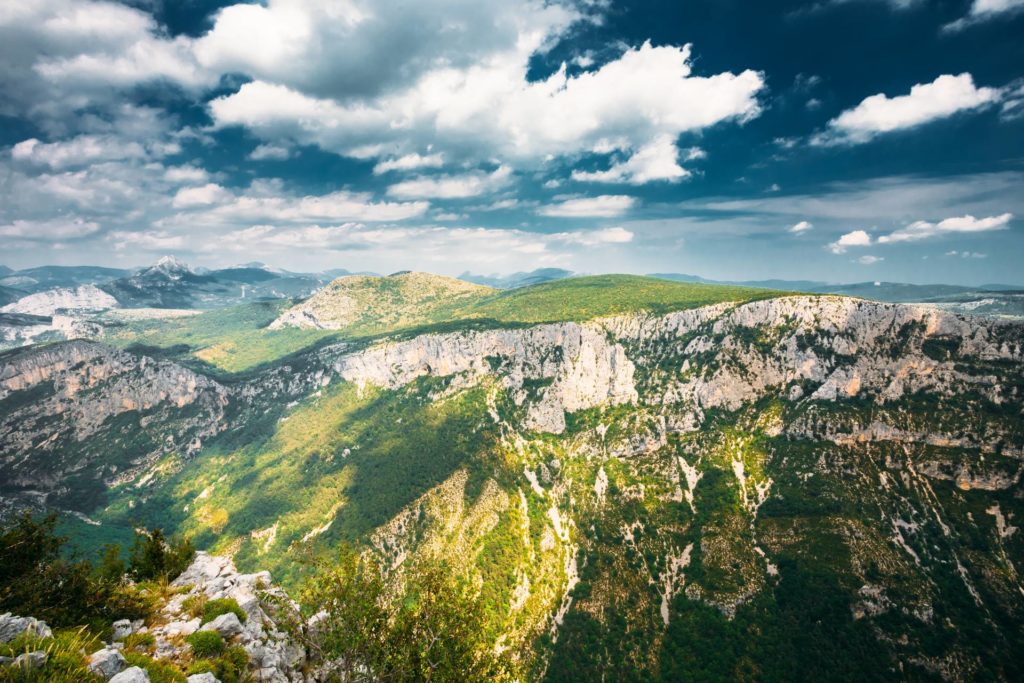 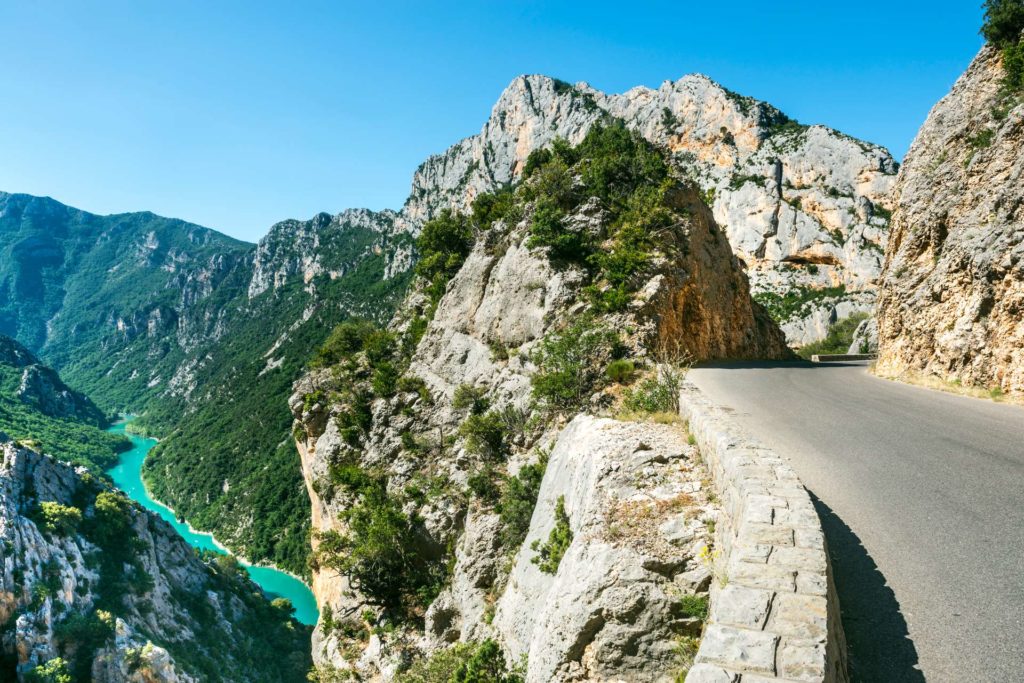 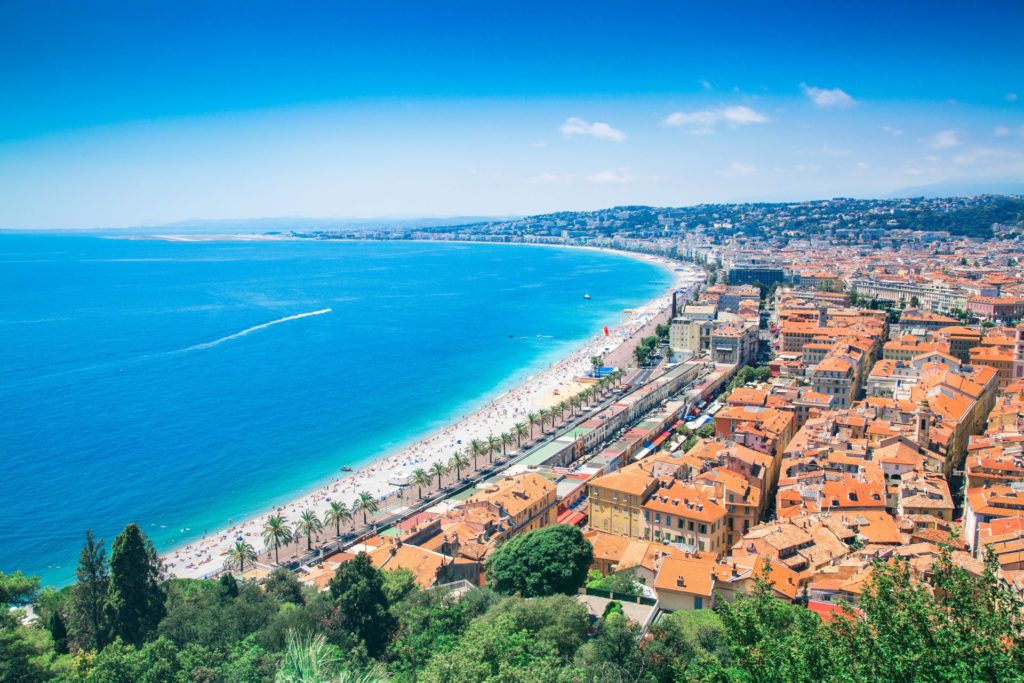 About Verdon Gorges in France

The Verdon Gorge is one of the largest gorges in Europe, and, with its steep rock faces and caverns, it is undoubtedly one of the most beautiful and spectacular landscapes in the world. No wonder the landscape is often compared to the Grand Canyon.

How did the Verdon Gorge come about?

Enormous water amounts created the gorge itself after the ice melted during the last ice age. The water force caused deep cuts in the rock over the millennia.

The Verdon is about 160 km long river that shapes the area in a unique way.

On the one hand by its incredibly turquoise water and on the other hand by its over 20 kilometers long and up to 700 meters deep gorge, the famous Verdon Gorge.

The gorge, which runs between Castellane and the Lac de Sainte-Croix near Moustiers-Sainte-Marie, is one of the largest canyons in Europe and is, therefore, a popular destination for tourists.

Dams with five reservoirs tamed the wild, turquoise-blue Verdon. The most beautiful of these artificial water reservoirs created by a dam is next to Lac de Castillon. For it to come into being, an entire village, Les Salles-sur-Verdon, even had to be rebuilt elsewhere.

The location between the hills and the purple lavender fields of the Valensole plateau is simply beautiful and unforgettable.

You have a fantastic view of the Lac de Sainte-Croix, where you can also rent a pedal boat or canoe from the boat rental company, from the viewpoint at the Ste Croix bridge. 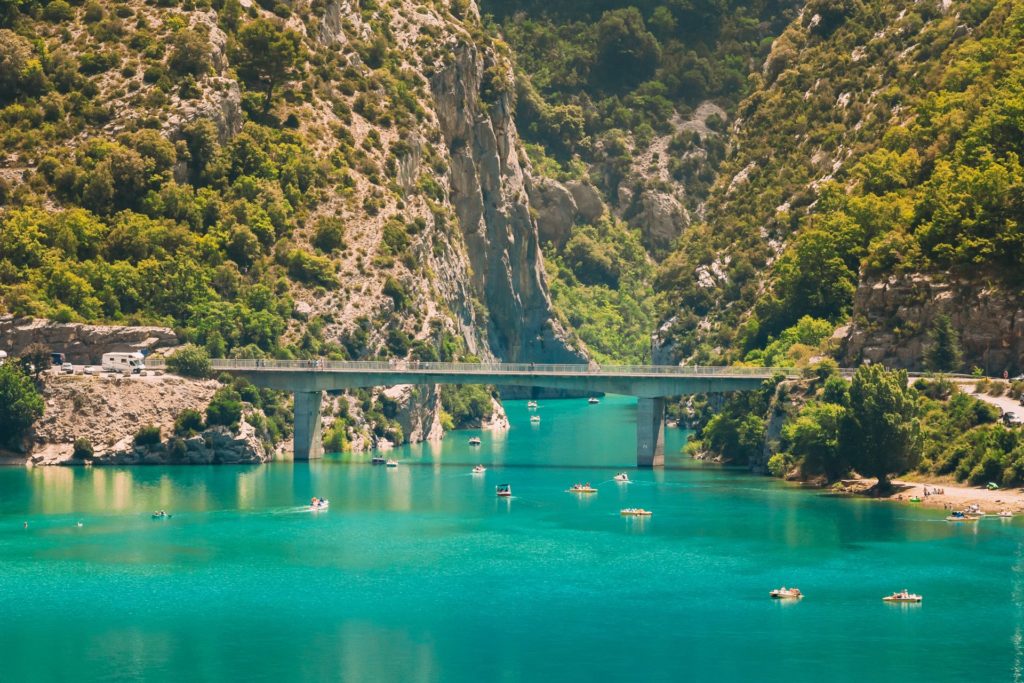 Where is Verdon Gorge?

These are the Gorges du Verdon is just under 2.5 hours’ drive from Nice, in the hinterland of Saint-Tropez.

Where to stay Verdon Gorge ?

There are various campsites near the nature park, from which you can go on excursions into the gorge and the surrounding area.

Here are some most splendid villages in France to check and stay when in the Gorges du Verdon:

How to get to Gorges du Verdon from Nice?

Your car or a rental car is the best choice for visiting the Gorges du Verdon. It is possible to get here, for example, via the A7 and A52.

Besides, buses run between Nice, Marseille, and Castellane, among others. From Castellane, you can reach the Verdon Gorge after a few minutes’ drive.

What to do in Gorges du Verdon ?

The magnificent Gorges du Verdon are also called the French Grand Canyon. And rightly so.

The national park is one of the largest canyons in Europe and part of the Verdon Regional Nature Park. The gorge itself extends from Castellane to the Lac de Sainte-Croix reservoir and is crossed by the turquoise Alpine river Verdon.

It has long been a paradise for nature lovers and active holidaymakers – not just in summer, not least because of the pleasant climate in Provence.

Water hiking to discover the “Grand Canyon” of the Verdon, or canyoning to explore the Notes area (tributaries of the Verdon). You will surely enjoy the best canyoning trips with experienced and state-certified guides.

A canoe, whitewater kayak, pedal boat, rowboat, or electric boat can be rented near the Pont de Galetas bridge to explore part of the gorge over the Alpine river.

Another less crowded reservoir than the Lac de Sainte-Croix is ​​the Lac de Castillon above the town of Castellane, where you can also go boating. You can fish wonderfully on the Lac Chaudanne reservoir’s rocky banks, which lies below Lac de Castillon.

In the 70s and 80s, the Verdon Gorge was one of the most important climbing areas in southern France, and the steep rock faces in the gorge are still climbed intensively – both rope and free climbing.

Climbing steep walls in the dizzyingly high rock faces is often only possible for climbers with friends and clamping wedges, as there is often no drilling. The difficulty levels that have to be conquered can range up to 10 and harder on climbing tours.

The Verdon Gorge, with its limestone cliffs, is ideal for hiking, not just in summer. And that although the Verdon Gorge could not be crossed for a long time. It was not until 1905 that the gorge with its steep rock faces was explored by the cave explorer Edouard Alfred Martel.

Today, over 1000 paths cross the limestone cliffs of the Gorges du Verdon and attract hikers from all over the world to the national park year after year. From easy routes to challenging technical trails with iron ladders, hikers will find what their hearts desire here.

How to visit the Verdon Gorges?

High roads that are accessible by car along both sides of the gorge. You can take different routes, and they all have in common that there are numerous picturesque viewpoints along the roads, from which you can enjoy a breathtaking view of the gorge and the turquoise Verdon.

The best way to fully discover the Verdon Gorge is to join our private tours with a driver, and air-conditioned minivan pick up at your hotel in Nice or other places on the French Riviera!